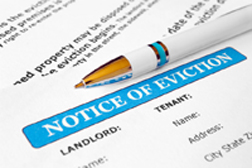 Nearly 50 years ago, Harold Wilson's Labour government introduced the first law to make unlawful tenant evictions a criminal offence. This law was designed to deal with the 'incentives' which encouraged landlords to remove tenants. So how do you evict a tenant lawfully?

Current laws still make it a criminal offence to unlawfully evict and harass tenants. It can also lead to claims for damages in the civil courts. The level of damages can often be the difference in the value of the property with a sitting tenant and with vacant possession.

The vast majority of private sector landlords are aware of the rules relating to recovery of properties at the end of tenancies and during tenancies and use them properly. However two recent cases have again indicated that failing to follow the legal process can cause significant problems to landlords.

Edinburgh Sheriff court
Landlord found guilty of breach of the peace by shouting at his tenants and uttering threats.

Cupar Sheriff Court
Landlord found guilty of attempting to evict one of his tenants without obtaining a court order. The tenant in question was pregnant and the landlord's eviction attempt involved the door and the windows of the property being removed while the tenants were there. His explanation that "I am not that good at paperwork - that is my weakness" was, unsurprisingly, not accepted by the court.

Both landlords can expect substantial fines if not worse. Both are clear examples of situations that would have been much better handled by taking expert legal advice.

We provide a full range of legal services to private sector landlords including how to evict a tenant, often at fixed rates. Contact our LetLaw team for further information.