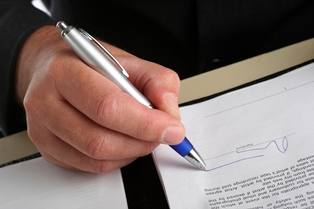 When a Will is made, several decades may pass before it is required. In that time a number of events could take place which cause the original will to be misplaced. Examples being the testator moving home and losing it or the solicitor who prepared it not storing it correctly. Unfortunately accidents do happen however if there is a copy of the signed Will then there is a court process that can allow the copy to be used.

The court process is known as an action for proving the tenor.  Anyone who has in interest in the missing Will would typically be able to raise the action. In practice this would normally be the executor. The action could be raised in the Sheriff Court or the Court of Session. A solicitor will be able to advise the best option for you. The application must be served on all individuals named as beneficiaries in the Will. In addition, it must be served on anyone who could potentially have an interest in the estate such as anyone named in a previous Will (if there is one) or any beneficiaries who would inherit under the Laws of Intestacy. This allows anyone with a potential interest the chance to either contend or support proceedings.  If nobody other than the person bringing the action (the pursuer) has an interest then they only need to give notice to the Lord Advocate to represent the public interest.

What do you need to be able to prove the tenor?

To prove the tenor of the Will the pursuer must demonstrate three things to the court:

Proving the first two points would hopefully be relatively straightforward. The court has previously accepted a photocopy of a signed Will as evidence, which the solicitor who prepared the document will most likely have.

The third condition can be trickier to demonstrate and it will depend on the individual circumstances. For instance the will could have been lost in the mail, or removed by the testator and accidentally destroyed. Despite a solicitor’s best efforts they may note that they have stored the Will in their safe but it is not able to be found when needed.  The circumstances are usually explained by anyone who knows the situation and confirms to the details in an affidavit (sworn statement) which is then presented to the court.

Once the action has been fully submitted and considered,  providing it is undefended, the Court will usually grant decree. Defended claims have to proceed to a hearing.

Where decree is granted, the extract decree is treated as being the equivalent of the Will itself and the estate administration can then proceed as normal.

“Tips to keep your will safe”

This is a good time to remind you to keep a copy of your Will with your important documents and if you hold the original to keep it somewhere safe! You can also ask that your solicitor stores this in their safe.  You could also consider giving a copy to the executor or a beneficiary so they are aware of its existence.

Should you require to prove the tenor of a Will, or even have a Will prepared, please do not hesitate to speak with our Private Client team who will be happy to assist.